​​The power of role-based e-learning: selected content, tables and figures ​

Chapter 4 Designing the problem
The Design Space framework was introduced in the previous chapter using First Fleet as the online role play example. This chapter focuses on the three elements in the second layer of the Design Space framework, namely: Problems, Roles and Rules. This chapter gives specific attention to the Problem element of the Design Space using RiftRaft as the example.
​
Producing an educationally meaningful online role play is not a huge or daunting task needing months of preparation. Beginning with a few simple, elegant design steps allows designers to build confidence through exploring and extending their skills. It is also a lot of fun to expand subject knowledge and educational capacities by becoming a designer and user of online role play. 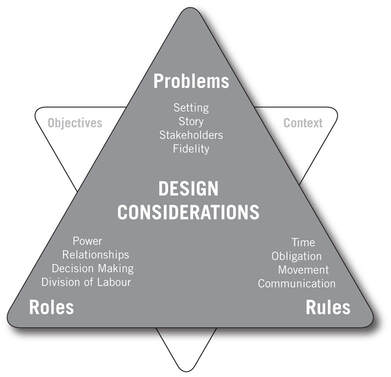 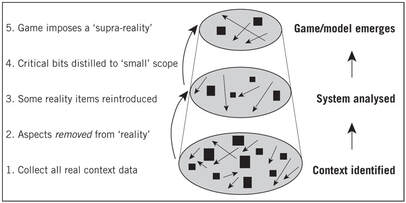 Summary
Role-based e-learning, like other human activity, develops in stages, marked by “events” of some kind that carry the action forward. To create this movement requires careful compilation of details into a structured design which replicates – but is never intended to “be” – some aspect of the real world.

These elements always begin with an understanding of what this book newly defines as the Design Space. The first element in this space is the Problem and this chapter examined ways to identify and build this into the basic framework for an online role play. Other educators, who may later become “end users”, will have specific reasons for choosing the role play, which may be other than the original intentions. Therefore it is vital that the way these elements are created and arranged will withstand scrutiny under conditions that could not be imagined at the time of working on the design.

As answers are developed to the following questions the design will move through a number of iterations. All good writers know that the “final edition” is never the first one written. Allow time to enjoy this act of creation.

• What specific means will best represent the selected stakeholder viewpoints?
• How will these be best represented in this role play?
• When should the various elements be introduced? All at once, at the beginning? Is there a particular sequence that will help align the story and contribute to the action?
• Will all the roles be introduced in the same way? Or will there be greater impact if different modes of introduction are used?
• How much information is needed to make each role acceptable and understandable to participants?
• What do the participants need to know about any actual/possible relationships among the stakeholders represented by the roles to be used in the role play?
​
In the next chapter Roles and Rules are shown to be linked in innumerably different ways to suit particular Problems. Together these three elements become the focus for the tension and stakeholders’ actions which underlie the fidelity of the online role play and are essential to learner engagement – however abstract the story.
Next Chapter